End of the Year

Wow... it's New Years Eve... no more 2011 left... where did it go? It has not been a boring year, that's for sure.
This is the third city (two states) that we have lived in this year. We moved in March then in September, I do not want to move again anytime soon. Between March and August Rock became more social through library visits and going to the parks and I became more fit, by the same activities (1.5 mile walk to library and half mile more to city park). I tried to go across town about twice a week and there was a small park at our apartment complex for days we didn't walk. Hubby started back to college in August as a full time student and that is why we moved again. It was an hour to school for him, now the college is less than a mile away, so our family has been able to spend more time together when he isn't in class. He has really enjoyed the learning process this time around, I guess it is easier to want to learn when you aren't bogged down by work also (like he was at the previous schools). Rock and I started on his ABC's  in September, though the process of homeschooling has slowed quite a bit since the arrival of Rain. I'm sure I will get back into the swing of things soon (like sleeping and eating when I should). The biggest change this year was adding the fourth member to our family :) So moving, Rock becoming toddlerized, school for both hubby and Rock, and Rain coming into the world... I guess that is were the year has gone. Also... 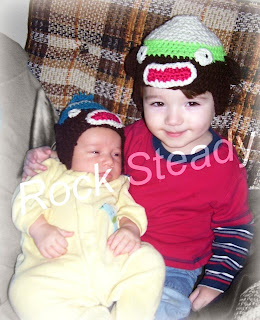 I came to the realization that I have a one month old (as of yesterday) and a twentyone month old (in a couple days). They are growing so fast! Last time I blogged about my family lil Rain had just arrived. now he is not so little anymore... ok so he was never really little, at least not since he left the womb. I was thinking late last night that if my babies keep getting bigger I don't know what I am going to do. Then I thought if I have a little six pound baby i won't really know what to do either. My brother in laws youngest daughter (one day older than Rain) and my sisters daughter (now 4) were both only 6 pounds and that is so tiny compared to my boys. I thought the deliveries went quick pushing out big boys I couldn't imagine having a tiny babe. Anywho, just some random thoughts I had.

Oh, the hats in the pic above were made by me :) I was a pattern tester for  Tricity Hokes Sock Monkey hat.I didn't add all the options and am still a fairly new crocheter compared to most but i think they are cute! And I was able to make both just in time for Christmas.

We had a laid back quiet Christmas this year. Just our family of four, a good Christmas dinner, and a birthday cake for Jesus. The only presents the boys received were the hats and some gifts from family. Hubby and I also didn't exchange presents, except I made him a hat too. (no monkey on his though) We don't want to Christmas about "getting" so we try to tone down the presents they receive. Rock and I created a nativity out of recycled toilet paper tubes, a pop tarts box, and one piece of paper with figures I drew for him to color:

Rock played with his nativity again yesterday so I was very glad that we made it. On the pop tart box I drew 4 different scenes (for each side) to help tell the story. One side had the door to the inn with a 'no vacancy sign'. Another an open field for the shepherd which was continued to the next side to show Bethlehem in the distance with a star above the stable. And the final side, shown above, is of course, the stable. Rock's attention span didn't last for the whole story after creation of hte project but i let him play with it while I at least told the story (without props). He may not of understood yet but I still wanted to introduce the real Christmas story. I hope we can make it a family tradition to sit down and retell the Christmas story in a way the children can interact: like the nativity scene we did this year, a play, having them illustrate it, the possibilities are endless.

I guess now that this year is ending I need to set my goals for the coming year (no, not new years resolutions, just plain, old goals). One main one is to get back into teaching Rock and develop something for Rain as well. I also would like to craft more, I keep saying it but need to just do it.

Hubby and I have prayed in the New Year the past couple years since we got married and plan on doing it again this year. I hope you have had a good 2011 and that you and your families have a blessed new year!


“This is what the LORD says— he who made a way through the sea, a path through the mighty waters, “Forget the former things; do not dwell on the past. See, I am doing a new thing! Now it springs up; do you not perceive it? I am making a way in the wilderness and streams in the wasteland.”
Isaiah 43:16, 18, 19 (NIV)
Posted by JustCorey at 12/31/2011 1 comment:
Labels: Crochet, Family, Holiday, Rain, Rock

Birthday Blessings Bash coming soon at Life with my Littles

I love entering into giveaways. I usually stick to giveaways that are for cloth diapers and other useful items for the kiddos. But during the holidays you can enter for all sorts of giveaways... clothes, giftcards, toys, toys, and many other items. So I have entered for everything I think our family might be able to use. Though I have only won one diaper so far this holiday season, I am still hopeful.

Well, the holiday season is coming to an end so It will be back to fluffy giveaways for me real soon. And I have already found an event that will be just that. Mama of the Littles at Life with my Littles is having a birthday bash with lots of fluffy goodness. She is blessed with two boys just like me and is having this event for their 2nd and 4th birthdays.

Some of the fluff included in this event are:
Applecheeks, Happy Heinys and Bum Genius. I am especially excited about the Thirsties and the Rockin green detergent!

If you want to enter in for some cloth diapers and accesories yo ushould check out this event in the coming year, too!

Like the cold of snow in the time of harvest
is a faithful messenger to those who send him;
he refreshes the soul of his masters.
Proverbs 25:13 (ESV)
Posted by JustCorey at 12/20/2011 No comments:
Labels: Cloth Diaper, Giveaways Entered

In celebration of the Zanussi Cookers, Appliances Online is wanting to know how we 'make every meal a masterpiece.' I am entering at Minnesota Mama's Must Haves for a chance to win a $100 Amazon gift card. 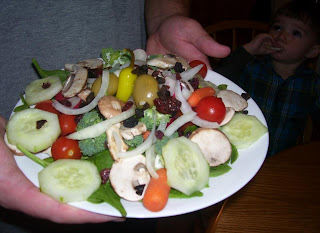 Every meal... even a simple salad, can be a masterpiece at our house... It even became more attractive for my little Rock to share veggies with his dad (or was it the other way around?) I would like to win the gift card, but it is nice to have a reason to share this random picture of food also :)


All these veggies remind me of Daniel...

Daniel then said to the guard whom the chief official had appointed over Daniel, Hananiah, Mishael and Azariah, “Please test your servants for ten days: Give us nothing but vegetables to eat and water to drink. Then compare our appearance with that of the young men who eat the royal food, and treat your servants in accordance with what you see.” So he agreed to this and tested them for ten days.
At the end of the ten days they looked healthier and better nourished than any of the young men who ate the royal food. So the guard took away their choice food and the wine they were to drink and gave them vegetables instead.
Daniel 1:11-16 (NIV)
Posted by JustCorey at 12/10/2011 No comments:
Labels: Family, Food, Giveaways Entered 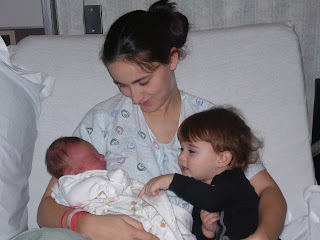 Our little Rain was born Nov 30th at 8:53 am. Weighing in at 9 lbs 2.7 oz and a length of 21 in. Due to some interesting circumstances, Rock was in the room during the delivery and got to share in the experience. He was a very patient, good little boy as his brother was born... it helped that we were in the hospital for only about 30 minutes before their was another baby boy in the room.
The day we brought Rain home it was pouring down rain and the birds were all out to greet him. What a blessed woman I am to now have two little men!


For the LORD is good, and His love is eternal;
His faithfulness endures through all generations.
Psalm 100:5 (Holman)
Posted by JustCorey at 12/04/2011 1 comment:
Labels: Family, Pregnancy
Newer Posts Older Posts Home
Subscribe to: Posts (Atom)

A Little 'bout Me

JustCorey
I am a Christian, a wife, and a mother of two boys. I am currently a full time stay at home mommy. I enjoy crafts of all sorts. I also homeschool my two boys.