I may or may not have mentioned before that I have been slowly teaching Rock some sign language. I ran out of useful signs for babies that I knew and had to start looking them up. Then at our local library I recently discovered Signing Time. I love the Volume 1 Baby signing Time and will probably buy it sometime soon. Rock's favorite song is "The Pets I Love"

Rock only consistently does about three signs: milk, eat, and all done. Though he has also tried: more, fish, water, potty, and probably a couple others that i can't think of right now. Milk is by far the most used... lol
(also very difficult to catch on camera...but not quite impossible) 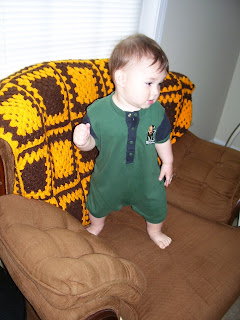 Also we have helped dadda some in the garden. Mostly throwing dirt and rocks, pulling up grass, and running off with important items like the watering can. :) 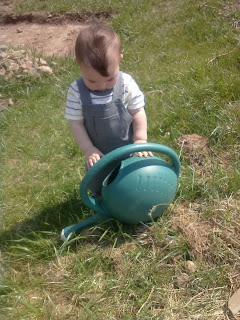 This weekend we plan on going to my grandparents house for an Easter Get together. Hopefully, hubby doesn't have to work this weekend so he can enjoy a little break too.

Have a great Easter Weekend!


Joseph of Arimathea, a prominent member of the Council,
who was himself waiting for the kingdom of God,
went boldly to Pilate and asked for Jesus’ body.
So Joseph bought some linen cloth, took down the body,
wrapped it in the linen, and placed it in a tomb cut out of rock.
Then he rolled a stone against the entrance of the tomb.
Mark 15:43, 46 (NIV)
Posted by JustCorey at 4/21/2011 No comments:
Labels: Family, Holiday, Rock 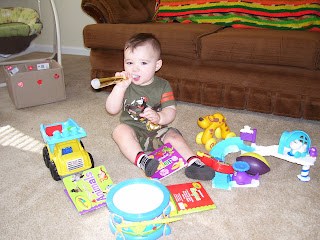 Oh blog, how I have missed you. So much has happened since we were last together. I have changed states once again and my little Rock has had a birthday. Rock is also walking... actually running... everywhere he goes.  Rock and I walk to the library often (a 1.3 mile hike across town). He seems to enjoy story time once a week with the other children in town.
We had our first Easter egg hunt together this past weekend. It was more of an easter egg pick-up than hunt... as you see the eggs were just scattered across the lawn. But Rock seemed to enjoy it, despite the cold. (note the red noses) 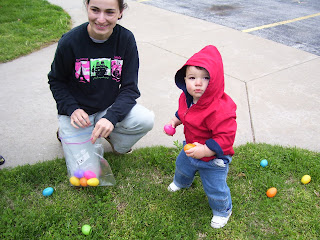 I﻿ hope to be able to update more often since we once again have internet (YAY!)
Until next time...
Follow God’s example, therefore,
as dearly loved children and walk in the way of love,
just as Christ loved us and gave himself up for us
as a fragrant offering and sacrifice to God.
Ephesians 5:1, 2 (NIV)
Posted by JustCorey at 4/19/2011 No comments:
Labels: Family, Holiday, Rock
Newer Posts Older Posts Home
Subscribe to: Posts (Atom)

A Little 'bout Me

JustCorey
I am a Christian, a wife, and a mother of two boys. I am currently a full time stay at home mommy. I enjoy crafts of all sorts. I also homeschool my two boys.